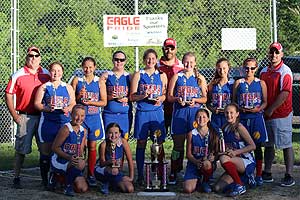 The 2015 Eagle Pride entered the summer playing in their first year at the 12-U level.  After working hard during the offseason, the girls were excited to keep things rolling where 2014 left off.  We played in 8 tournaments finishing with a 25-12 record.  The high point of the summer was capping off back-to-back state championships by winning the 2015 ASA 12U A State Championship.  Additionally, we finished 1st in Bulldog I, MAYSA Triple Play I, and Summer Slam and finished second in the Chelmsford Fall Fest in Massachusetts.  The girls also challenged themselves by playing in the Lowell, MA Memorial Weekend Tournament and the 14-U MAYSA Triple Play II.  Probably the most memorable tournament for everyone was the ASA 12U Eastern National Championship tournament in Stratford, CT where the Eagle Pride finished tied for 17th with a 2-3 record.  None of this would be possible without the tremendous support of our parents and families – thank you so much!  See you in 2016! 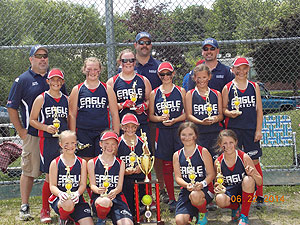 The 2014 Eagle Pride entered the summer season with a lot of experience on the team – many girls playing 10U softball for the 3rd year in a row.  After adopting the team motto “This is How We Roll” the Eagle Pride girls turned all of their very hard off season work into great successes.  We played in 7 tournaments in all finishing with a 30-2 record.  The highlight of the season came with the Eagle Pride capturing the 2014 ASA 10U State Championship.  In addition, we finished 1st in Bulldog I, MAYSA Triple Play I, Coca-Cola Classic, MAYSA Triple II and Bulldog II.  To cap off the season the girls finished 2nd in the Dartmouth Summer Blast in Dartmouth, MA.  It was a memorable summer for all of the girls!  Thank you to all of our parents and families for their support.  The girls have been working very hard once again this offseason as the majority of the Eagle Pride will be looking forward to the challenge of moving up to 12U! 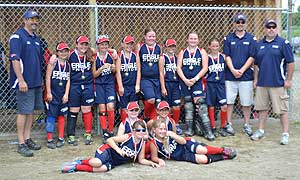 Our 10-U team combined girls from the 2012 Pride and Screamin’ Eagles to form our 2013 edition of the Eagle Pride.  We played in 5 tournaments finishing with a 14-8 record.  We finished 1st in the Coca-Cola Classic, 2nd in MAYSA I and 3rd in States, MAYSA II and Bulldog II.  The girls worked very hard all summer and maintained a never give up attitude coming from behind in numerous games including an exciting 3 inning tie breaker to advance to the semifinals at States.  It was a very fun summer playing softball, goofing off a little, and cheering on our 12-U Screamin’ Eagles.  We look forward to bringing the girls back in 2014 to finish out our last year at 10-U! 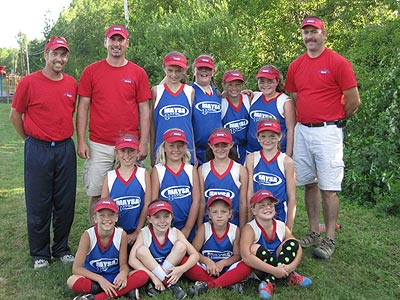 The 2012 Pride entered into the season with 12 young girls playing summer softball for the first time.  We played in two tournaments and fought hard in each game we played.  Not knowing what to expect, the Pride came together and worked hard as a team and improved our skills through each practice and game played!  We are anxious to bring the girls back in 2013 with more experience and look forward to working with the girls to help them continue to grow their skills and compete at a high level.  A very special thank you to the parents and coaches who took a lot of time out of their summer to create a great softball experience for our girls!